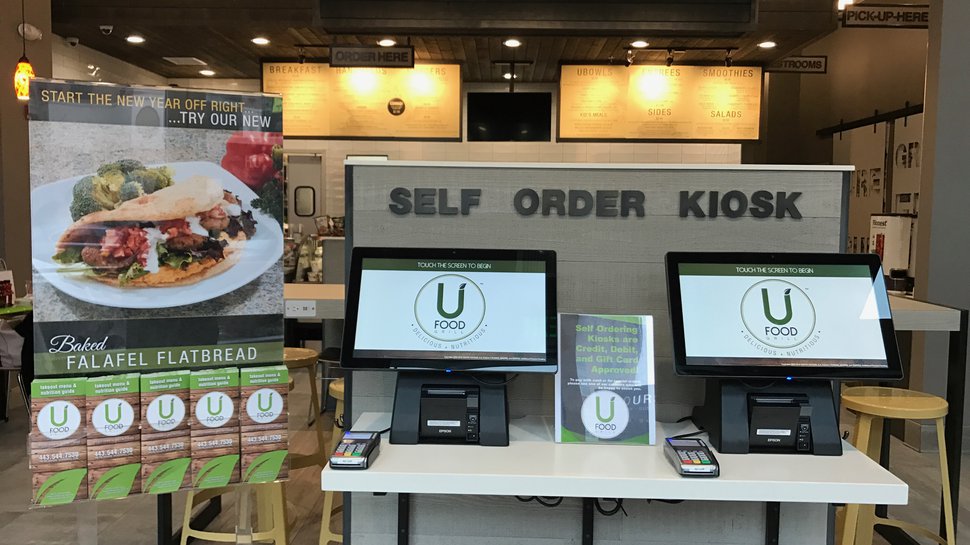 Patrons at the newly opened UFood Grill in Owings Mills, Maryland, won’t be forgotten. They can order at a self-serve kiosk that will remember them for future visits, thanks to facial recognition.

“Nowadays, the biggest thing, especially in restaurants, is convenience. They walk in, they place their order, they can add on items, they can customize their meal, very quickly by themselves, with little interaction if that’s what they prefer,” she said in an interview with Kiosk Marketplace. “We were getting a lot of requests for ease of ordering,”

Customers can choose to order at one of the two kiosks or may place their orders at the traditional cashier counter. Kiosk users are asked if they would like to add their phone number or have a photo taken to make future orders easier. They can order and pay in less than 10 seconds. Once the order is ready, the servers call out the customer by name to pick up their order at the counter. Servers also take orders to customers.

“Every quick serve and fast casual restaurant can benefit from facial recognition,” said Tommy Woycik, president of Nextep, the company that developed the technology. “While initially using it indoors, we will soon be piloting at our touchscreen drive-thru locations.

“Imagine visiting your local drive-thru and ordering your favorite customized coffee drink with a quick glance at the camera.”

The two Nextep kiosks at Ufood, which replace one cashier, help the chain upsell by asking customers if they’d like an add on. It also provides ingredient information, saving both the customer and the staff time asking and answering questions, Woycik said.

“Why repeat the customization process every time? For years, Nextep has stored previous orders with a phone number or a tokenized credit card swipe, and guests can still recall past orders using these lookups,” he said. “But phone numbers take time to enter, and the credit card industry is moving toward P2PE/E2EE encryption, making past order recall challenging, and in some cases impossible. Storing and retrieving past orders with facial recognition is exceptionally fast and very accurate.”

The UFood kiosks not only make it easier for customers to order, they also help employees manage operations by offering a user-friendly POS experience and a variety of other capabilities, Rincione said.

“If you’re a vegetarian and you want the vegetarian option, the cashier doesn’t have to turn to the manager and say, ‘Is this vegetarian?’ or pull out a menu,” she said.

The manager can also take inventory using either the POS system or the kiosk.

“When a customer takes a look at the register system they don’t have to do a lot of reading,” she said. “We’ve streamlined everything through Nextep through our POS system.”

It even displays pictures, Rincione said.

“When we set up our system, we took pictures of every menu item that we offer,” she said. “For instance, if you wanted to order a Cobb salad, you would go to the salad button and a picture of the Cobb salad would pop up with individual pictures of what’s on that salad, and you can either unclick or add additional of each item. If you wanted extra corn, you could click it twice.”

Those worrying that facial recognition may strike some customers as an invasion of their personal space need not worry, said Woycik, who said the technology is “opt in.”

“The camera is only turned on if they request to either store an order or look up previous orders. It is important to respect the privacy of guests that don’t want to use this time-saving feature,” he said.

Steve Goldberg, a forensic psychiatrist who owns the Owings Mills franchise with his wife, Lana, said his customers seem to be on board with the technology, He admitted, however, that he wasn’t an initial fan of the idea.

“I worked in corrections for many years,” he said. “Just the idea of something watching me I didn’t like. But as soon as I knew that that wasn’t the case, I was much more comfortable with it.”

While some people are wary of the facial recognition feature, Goldberg said customer reaction has been mostly positive. In the first week, for example, one-third of the customers ordered at the kiosks, but Goldberg thinks more will use them as they become familiar with the restaurant. He has already noticed that repeat customers are using the kiosks.

“We’re not taking any sort of NSA-type scan of your facial recognition when you walk in the restaurant,” he said. “That really hasn’t been an issue. Most people are interested. They think it’s cool.”

Rincione said the kiosks at the Maryland restaurant are just the beginning. The company plans to include kiosks in all new locations, which include two company-owned street locations on Long Island this year.

“The future is self-ordering and online ordering,” she said.