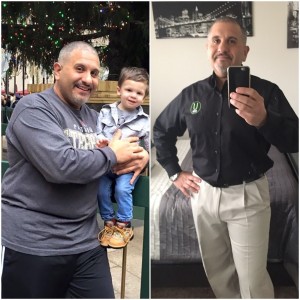 “I woke up one morning, looked in the mirror, and said, ‘Wow, I’m pretty fat. I should lose some weight,’” remembers Sal Rincione. Ninety days later, he’d dropped 45 pounds.

Rincione had motivation beyond his own health. As CEO of UFood Grill, a health-focused fast casual restaurant chain based in Burlington, he decided he owed it to the company to make a change. “I’m a CEO of a healthy brand,” he says. “I should start practicing what I preach.”

Motivated by UFood’s vice president of real estate and construction, who was also trying to lose weight, Rincione began going back to his roots, embracing his past as a military counterintelligence officer who earned the Presidential Fitness Award. He dropped 45 pounds in three months, then another five. Now, he says, he’s content to maintain his weight where it is.

“If I got any skinnier, I’d look weird—kind of like when Jonah Hill lost all that weight,” he jokes. “Everyone likes fat Jonah Hill; they don’t like skinny Jonah Hill.”

Here’s how the weight came off:

Using UFood’s universally sub-700-calorie menu as his inspiration, Rincione reformed his eating habits first. He cut down on dairy, and totally eliminated beer, processed sugars, fried food, and bad carbs—the last of which was no easy feat. “I’m an old-school Italian from Brooklyn, so I grew up eating lots of pasta, lasagna, all of the good, carb-filled, options that good old Italian boys eat,” he says. “I would sit and eat an entire pizza by myself. I don’t do that anymore.”

Rincione says he does not follow any specific diet, and doesn’t starve himself. Instead, he focuses on making his own food whenever possible, and eating small, healthy, meals frequently.

Though Rincione credits most of his weight loss to dietary changes, he says he now uses fitness to maintain and tone his physique. He runs two miles every day, and incorporates weight training to work on his upper body and core.

“The best thing was to see that I actually have abs,” he says. “That was real nice.”

Article by: By Jamie Ducharme from bostonmagazine.com